Healing the world by raising awareness?

An essay on some initiatives of the United Nations, and Europe’s part in them

By JJB, based on research generously provided by R.Soth

This year, on the 25th of November, the United Nations’ International Day for the Elimination of Violence against Women has not passed by unperceived. Many campaigns have contributed to enhance public awareness of a deep-rooted social problem that is only too often ignored. In France, for example, a drastic image (see below) has been used to draw the public’s attention to drastic facts, according to which the number of female rape victims amounts to 75000 per year in France, meaning that about 200 women are raped each day. Society’s attitude being a major factor of this problem, raising public awareness is unarguably one of the fist steps in order to improve this unacceptable situation. 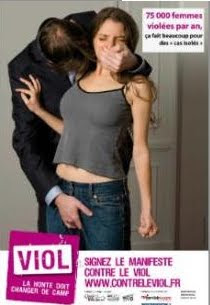 The success of this campaign is a good example for the possibilities that lie within awareness initiatives such as International Days proclaimed by the United Nations. Thus, we might ask if the United Nations’ Millennium Development Goals (MDGs) have had a similar success, or if they are operating on another level. Because after all, the MDGs are the most general and wide-scale program that the United Nations have installed so far (they include, but are not limited to gender equality and women’s rights).

In September 2010, political leaders from 189 countries worldwide gathered at the United Nations’ summit for the Millennium Development Goals. These goals had been agreed on ten years before, in order to establish an agenda for development around the globe – except for already fully industrialized countries, such as the EU’s member states, the USA, Canada, Japan and South Korea. Most of these goals were to be met by 2015, whereas a minority was to be achieved at the very latest by 2020. Given this time limit, the year 2010 represents an important milestone for the assessment of the progress that has been undertaken so far.

Before assessing their success, it is important to define the eight Millennium Development Goals, many of which are subdivided into different targets. The first goal is to eradicate extreme poverty and hunger in the world. To do so, the main sub-targets are to enhance employment, to cut down the number of people living on less than one Dollar per day, and to fight against the spread of hunger crises. The second goal consists in providing universal primary education on a global level. The third goal aims at better gender equality and better social situation for women, especially as far as primary and higher education are concerned. The fourth goal is to reduce the countries’ child mortality rate. The goal should be to reduce the mortality rate of under five-year-olds by two thirds. The fifth goal seeks to improve maternal health. In order to tackle this problem, the two targets are providing universal access to reproductive health and reducing maternal mortality rates by three quarters. The sixth goal is dedicated to the fight against the spread of diseases like malaria and HIV/Aids. The main sub-targets are to halt and even reverse the spread of these diseases, and to make HIV/Aids-treatments universally accessible.
Environmental sustainability represents the seventh goal, whereas the eighth goal aims at a better international, global partnership for development.

Europe has shown a rather strong commitment for achieving these goals. The countries of the European Union have raised funds of a total of 143 billion Euros. Thus, certain political leaders show reasonable satisfaction with this commitment, as for instance José Manuel Barroso, the EU commission’s president. Others are more sceptical, arguing that Europe should consider all goals equally, rather than focussing too much on single points, such as poverty and maternal health. In spite of supporting his country’s important financial contribution to the Millennium Goals, the British deputy prime minister Nick Clegg also insisted that other countries should do their part, too. French president Nicolas Sarkozy voiced similar worries, suggesting that taxes on financial transactions might cover larger expenses in favour of the Millennium Goals.

So far, remarkable progress has been achieved in regard of global poverty, educational gender equality, child mortality and maternal health. Critics argue, though, that the main factor for these achievements has been economic development, and not interventions of the national community. And while the share of poor people in the world’s population has diminished, their absolute number is on the rise in countries such as South Africa and the region of Sub-Saharan Africa. Tragically, it is highly unlikely that any country of this latter region will achieve the Millennium Development Goals.
Other issues addressed by these goals continue to be highly problematic, especially the continuing spread of HIV, as well as worldwide hunger, which has even deteriorated since the global financial and economic crises and cases of excessive food price speculation.

In conclusion, the progress made in order to achieve the Millennium Development Goals is difficult to assess. In addition to that, several issues concerning human rights are not addressed at all by the MDGs. One might therefore think of these goals as a waste of money and energy, which should rather be directed to development projects. Yet, they represent an ambitious political agenda on a global scale, enhancing the international community’s commitment for development.

In spite of these possible critics concerning the execution of the United Nations’ MDGs by the international community, we can still acknowledge that the initiative setting up Millennium Development Goals has helped to raise awareness on a worldwide scale. We might actually conclude that, while these goals are far from being reached, their existence still helps us to measure and criticise the steps that have been undertaken so far. If there was no global agenda for development, signed by all the world’s governments, how could we criticise and encourage the world’s governments to do more? In fact, we might call their lack of ambition to achieve the MDGs “hypocrisy”. But if they had not signed any global commitment at all, they would not only be less “hypocritical”, but also more openly cynical, selfish and in denial of any ideals.

Yet, while this conclusion may sound highly optimistic, the sad truth is that there are many obstacles limiting the effective success of all these campaigns raising awareness concerning the world’s problems.
This is what the American satire-network The Onion refers to in an article entitled: “December Named National Awareness Month”. In fact, as this article suggests, while there are many campaigns raising people’s awareness on a specific topic, many persons seem to need a campaign raising their awareness on life in general, in the first place. As The Onion ironically argues, “Oblivousness strikes 1 in 3 Americans… and most don’t even know it. December is National Awareness Month. It’s as easy as actually looking up for once”. The article also cites an “expert” of the “AFPAT” (American Foundation for Paying Attention to Things): "A simple self-exam once a month can greatly reduce the chances of becoming unaware […] First, position yourself in front of your bathroom mirror. Second, make eye contact with the reflection in the mirror. Now, while still maintaining eye contact, take three to five minutes to think about the fact that you exist as a human being. […] As long as you can remember to do that and not just completely tune out for an entire year or so, you should be all right." 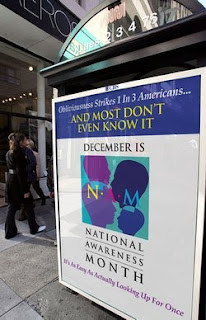 http://www.theonion.com/articles/december-named-national-awareness-month,2853/
Posted by JJB at 10:26 AM No comments: 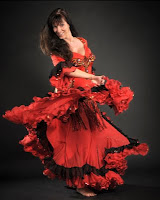 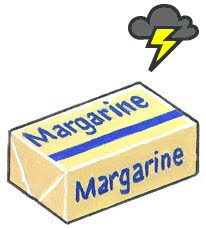