Check it out: Fact checking for political fair play

The European Union can easily be used as a scapegoat for all kinds of unpleasant burocratic ideas. This is not only a problem for fair play among political parties, but also concerns media coverage : From time to time, journalists might be tempted to dramatize the information that they try to sell.

A check for the UK
For example, the Telegraph announced in 2011: "Children to be banned from blowing up balloons, under EU safety rules". The article also quotes a euro-sceptic member of the European Parliament who suggests that "the "kill joy" world of EU officialdom was being ill-equipped to understand the concept of children having fun". After analyzing the case, this fact checking blog answers:
"Balloons made of latex must carry a warning to parents that children under eight years should be supervised. Furthermore, all toys aimed at children under the age of three should be large enough to prevent them being swallowed. However as one former head of media for the European Commission’s London office has pointed out, the EU can only “regulate how things are put on the market, but not how they are used in the home.” Furthermore, these precautions are not new, as the Telegraph article implies. The Commission asserted the new law is in fact enforces the same restrictions on toy safety which has been in place since 1988."

The Internet page of the European Commission's representation to the United Kingdom is very experienced in fact checking. Since several years, they have successfully been contributing to busting "Euromyths". Some examples:

"Dear Sirs,
Contrary to claims in your article, “Barmy EU ‘colder fridges’ order will cost us £100m”, 12 December 2011, there are no new EU regulations ordering supermarkets to turn down fridge temperatures. The facts are less chilling."

"The inclusion of airlines in the EU’s emissions trading scheme is not intended to raise prices for travellers but to provide incentives for airlines to cut emissions.  This is not some kind of imposition by the EU. The UK fully supported the scheme."

"Dear Sirs,
We are as surprised as your readers to hear that your newspaper believes the EU wishes to merge Britain and France. The suggestion that the “EU wants to merge UK with France”, 2nd May, is absurd, and of course, untrue.
There is no proposal to create a new cross-channel region. What exist (and have done for 10 years) are a number of cross-border programmes aimed at things like boosting jobs and looking after the environment.
Yours faithfully
Johannes Hahn,
Commissioner for Regional Policy"


French Checking
But let's not always focus exclusively on the United Kingdom. French media also need a little help from time to time in order to stick to the facts. This is particularly important as France is preparing to vote for its new president. This is why the Internet page http://vigie2012.eu/ was created. Vigie2012 follows the candidates' statements about the EU and checks many of them, in order to tell truth from fake. Based on this information, they also identify the candidates who are "champions" and anti-champions of fair play in terms of European affairs. For exemple, this week's "champion" of thruth is Nicolas Sarkozy - whereas he used to be in a less glorious position, defeated by Francois Hollande.
In addition to the observation of candidates, Vigie2012 also follows media coverage on European issues. This ambition has been supported by EUplanet: since several weeks now, my mission has been to observe coverage by the evening news on France2. A very rewarding task in deed: France2 turned out to be a very solid euro-observer. Recently, France2 has always been leading the charts, compared to TF1 and France3. 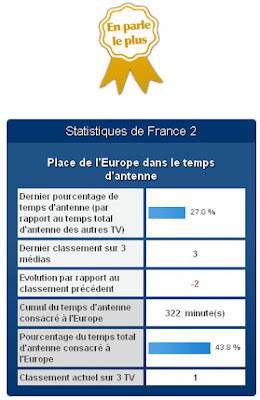 Apart from the broadcasting time dedicated to European topics, Vigie2012 also establishes more detailed evaluations on EU-coverage by French television - for example this specific week, where a large variety of themes were covered, from terrible human tragedies to the persisting economic crisis. Coverage of France2's news also served as an indicator for those members of Vigie2012 who are fact-checking statements of the presidential candidates, for example Nicolas Dupont-Aignant.

In addition to that, Vigie2012 also has an eye on French newspapers' coverage on the European Union. Using a special scale, distributing a different number of points according to the type of newspaper articles. 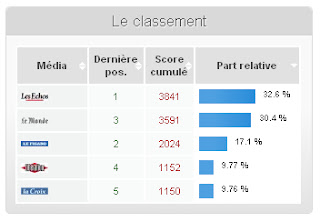 European Parliament: "He shall lead the rebellion"

This coming week, the new president of the European Parliament will be elected. However, the result is already considered official: European deputies will vote for Martin Schulz (Socialists&Democrats, Germany). In the meantime, Schulz is cultivating a rather revolutionary image, defying certain parliemantary traditions.

The European Parliament (EP) legislative period covers five years and includes a midterm-reelection for most important Parliament offices, such as the EP's president. In practice, this has been accompanied by informal agreements between the EP's major parties. One time, the Socialists&Democrats (S&D) would support the candidate of the European People's Party (EPP), and the next time it would be the other way around (or of course in a different order: first the EPP supports the S&D and afterwards the S&D votes for the EPP candidate). This way, both sides are sure to dispose of a large majority for their candidate during two and a half years.

Now, Jerzy Buzek (EPP, Poland) has reached the end of his mandate, and Martin Schulz (S&D, Germany) is going to take over. On his web page, Schulz cultivates quite a revolutionary image, affirming that he will make sure that the European Parliament, as the voice of democracy, will be heard on the EU-level. He insists that he wants the EP to be taken into account as a necessary means for the legitimacy of any executive action adopted by the member states - "I don't care whether that is written in the treaties or not!" (see for example here). He also criticises the way the member states proceed in order to solve the current crisis of the EU, finance and the economy (cf. for example here).

We will surely find out soon whether Martin Schulz will be able to live up to the ambitions he demonstrates. However, when facing this challenge, Schulz will be sure that he can count on the support of his party (and probably from other parties, too) : In December 2011, the S&D webpage posted an article, cited from a German newspaper, intitled "He shall lead the rebellion. Socialdemocrat Martin Schulz will soon be President of the European Parliament. Then, he will have to show what he is capable of". This is just one of many proofs of the numerous expectiations that Schulz will have to face.
Posted by JJB at 2:40 PM No comments: