This article has been written in response to an idea by Europe Direct Leeds : gathering short presentations of one national TV-show for each of the EU’s member states.

“A alma e a gente” could be translated as “The soul and the people”. Or, as a less formal translation might be more appropriate in English, you could also just call it “Soul and people”. It is a show presenting Portugal’s history and historical persons, its culture, its sights and its traditions. Most channels of the RTP network (Rádio e Televisão de Portugal) broadcast this show at least once a week.

The main reason to watch “A alma e a gente” surely is the show’s presenter: José Hermano Saraiva, a popular Portuguese historian. In fact, he also is the only person shown to the audience during most episodes. It’s his fascination, his passion and his deep interest for Portugal’s little hidden secrets that makes every spectator feel very clearly that Portugal must just be simply fascinating and deeply interesting. There is really not much more to “A alma e a gente” than a presenter and some facts and images about Portugal’s past and traditions. Yet, it is hard not to be charmed by the way Saraiva compassionately describes little details that happen to have a much richer history than we would have ever thought. To be honest, we might even have ignored these apparently unimportant little items if we had come across them on a touristic trip through a Portuguese museum. 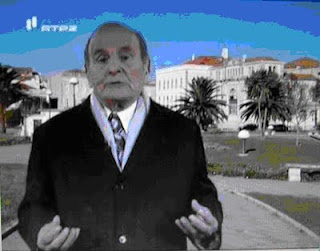 Thus, the anachronistic, completely old-fashioned concept of “A alma e a gente” actually works. Who would have thought so, in a time where the general media trend is highly in favour of more and more spectacular and exciting shows?
As the Portuguese are said to be very proud of their culture and their traditions, “A alma e a gente” seems to be a very harmonious way of cultivating Portugal’s heritage for a mass audience without either idealising it too much, or being too controversial, nor using it for purely commercial ends. This sensitive balance is not too easy to achieve.

Saraiva was a minister during the Salazar-dictatorship. In spite of his many honorific academic titles, he never obtained an academic doctorate-title on History, and some researchers have criticised his historical interpretations. His show consists mainly of things that many are used to think of as “old stuff”.

And yet, despite all that: by loving what he does and by being authentic, he makes others share his passion, as his success seems to prove. When RTP recently asked its audience to vote for their favourite “100 great Portuguese” of all time, Saraiva won the 26th place. Yet, this victory has a bitter aftertaste, when considering that former dictator Salazar won the 1st place, while, for instance, José Saramago, a Nobel-prize-honoured writer and critic of society, only won the 44th place.

Sources (only in Portuguese language):